Regulations for Alert Level 3 during COVID-19 lockdown, issued under the Disaster Management Act, No. 57 of 2002

With dog shows proceeding under Adjusted Alert Level 3, it is necessary for the Kennel Union to bring the following to the attention of all those hosting and organising dog shows, and those contemplating attending them:

It is important for all those involved in the hosting and organisation of dog shows to be aware that KUSA’s Public Liability Insurance only covers KUSA-licensed events insofar as they are “legal” under prevailing national laws. In consequence, owners and operators of venues, as well as conveners of dog shows, are hereby advised that KUSA accepts neither responsibility, nor liability, vicarious or otherwise, for shows at which the legislated limits for gatherings are not strictly observed.

Any transgression in the upholding of the legislated limitation of a gathering shall automatically invalidate the licence KUSA had issued for the show. Should any liability arise from a show at which the authorised size of the gathering had been exceeded, such liability shall fall to the owner or operator of the facility, or the convener of such unlawful gathering, as the case may be.

The Kennel Union of Southern Africa

A Tribute to Gael Morison

A TRIBUTE TO GAEL MORISON, FEDERAL COUNCILLOR, ON HER RELOCATING TO THE UNITED KINGDOM, JULY 2021

Gael was born in Pietermaritzburg, where she lived until 1988. Her parents bred and exhibited Rough Collies under the “Clan Campbell” Affix and were both KUSA Judges. Gael therefore enjoyed a typical “doggy” childhood, exposed to all facets of dogdom.

A fellow Rough Collie-exhibitor imported an Afghan Hound into South Africa.Gael’s fate was sealed; she simply had to own one of these exotic hounds!

Gael acquired her first Afghan Hound in 1973, sadly not a show dog. A short while later, her parents decided the time had come to pass the torch and gifted her a quality foundation dog and bitch. Gael and Peter started travelling to shows all over the country. They registered their Atlantis Affix with KUSA in 1976 and enjoyed considerable success in the show ring with their Afghan Hounds until their separation in 1986.

1n 1994 Gael added Shetland Sheepdogs to her kennel and continued her success with these two breeds, both as breeder an exhibitor.

Gael met Les, a Scotsman who had spent some time in what was then Northern Rhodesia and Southern Rhodesia, when he moved to KwaZulu-Natal (“Natal” back then!) in 1986.  After tying the knot, they moved to Hillcrest. Les was co-owner of Nashua Durban and they were fortunate to travel the world attending Dealer Conferences, which allowed them to attend many shows overseas. Dog-wise, Les was from a Working background and he soon obtained his judging qualification for the Working Group when the Herding Group was still subsumed into the Working Group.

Gael and Les became deeply involved with Clubs in KZN, not only serving on Committees, but also regularly stewarding at Shows. They independently continued to further their judging careers and Gael achieved All-breeds status in 1994.

Over the years, Gael & Les imported two Afghan Hounds from the U.K. and 1 from Spain.

Shetland Sheepdogs remained their choice for a second breed and the Shelties became Les’s heart dogs; he found them way more biddable than the Afghans! Les’s passion led to Sheltie imports from Australia and Canada for Kennel Atlantis.

Apart from their frequent assignments in South Africa, Gael & Les judged all over the world and will hopefully continue to fly the South African flag from their new base in the UK. They were never happier than when invited to judge on the same panel overseas, which they were fortunate to do on many trips to Australia, Canada and the U.K.

Gael has never hesitated to share her extensive knowledge of dogs with learner Judges and has served on the Judges Education Council of KUSA since its inception. At the time of leaving South Africa, Gael was the Chairman of the KwaZulu-Natal Provincial Council and a valued member of the Federal Council of KUSA.

It is with great sadness that we bid Gael and Les farewell but, as we do so, we wish them nothing but happiness and prosperity in their new home country. We know that, in Gael’s own words, they will always be “proudly South African dog people” and that they will miss us as much as we will miss them.

A Breed Standard is the guideline which describes the ideal characteristics, temperament and appearance of a breed and ensures that the breed is fit for function with soundness essential. Breeders and judges should at all times be mindful of features which could be detrimental in any way to the health, welfare or soundness of this breed.

BRIEF HISTORICAL SUMMARY: At the height of the Great St. Bernard Pass, 2469 metres above sea level, a hospice was founded by monks in the 11th century as a place of refuge for travellers and pilgrims. There, large mountain dogs have been kept since the middle of the 17th century for guarding and protection. The existence of such dogs has been documented pictorially since 1695 and in a written document at the hospice in the year 1707. The dogs were soon in use as companion dogs and especially as rescue dogs for travellers lost in snow and fog. The chronicles about the numerous human lives saved by these dogs from the « white death », published in many languages, and the verbal reports of the soldiers who crossed the pass with Bonaparte’s army in 1800, spread the fame of the St. Bernard, called Barry-dog at that time, throughout Europe during the 19th century. The legendary dog « Barry » became the epitome of the rescue dog. The direct ancestors of the St. Bernard were the large farm dogs common in that region. Within a few generations and aiming to a defined ideal type, these dogs were developed to the present day type of breed.

Heinrich Schumacher from Holligen near Bern was the first who began to issue genealogical documents for his dogs in 1867.

In February 1884 the "Schweizerisches Hundestammbuch"(SHSB), the Swiss Dog Stud Book, was started. The very first entry was the St. Bernard "Leon", and the following 28 registrations also concerned St. Bernards. On the 15th March 1884, the Swiss St. Bernards-Club was founded in Basle. On the occasion of an international Canine Congress on June 2nd 1887, the St. Bernard dog was officially recognized as a Swiss breed and the breed standard was declared as binding. Since then, the St. Bernard has been regarded as the Swiss national dog.

There are two varieties of the St. Bernard:

Both varieties are of considerable size and of impressive general appearance. They have a balanced, powerful, sturdy, muscular body with impressive head and an alert facial expression. 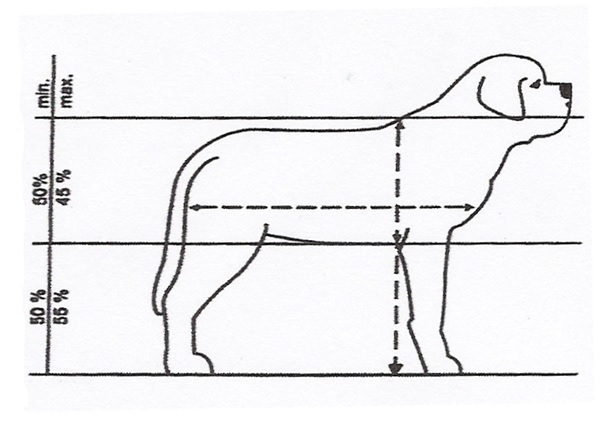 Skull: Strong, broad, seen in profile and from the front slightly rounded. When the dog is alert, the set-on of the ears and the top of the skull form a straight line, which slopes at the sides in a gentle curve to the strongly developed high cheekbones. Forehead falling away steeply towards the muzzle. Occipital bone only moderately developed, superciliary ridges strongly developed. The frontal furrow, which starts at the base of the forehead, is distinctly developed and runs up right in the middle of the skull.

The skin of the forehead forms slight wrinkles above the eyes that converge towards the frontal furrow. When the dog is at attention, they are moderately visible; otherwise they are rather inconspicuous.

Muzzle: Of even width. Nasal bridge straight, with slight groove.

Lips: Edge of lips black pigmented. Flews of upper jaw strongly developed, firm and not too pendulous, forming a wide curve towards the nose. Corners of mouth remain visible.

Well developed, regular and complete scissor or pincer bite. Close fitting undershot mouth without any space between the lower and the upper incisors acceptable. Absence of PM 1 (premolar 1) and M3 tolerated.

Moderately deep set with a friendly expression. Natural tightness of lids desired. A very small angular fold on the lower lids with the jaws only very slightly visible as well as a small fold on the upper lids are permitted. Eye rims completely pigmented.

NECK: Strong and of sufficient length. Dewlap and loose skin on the neck moderately developed.

Back: Broad, strong, firm. Topline straight and horizontal up to the loins.

Croup: Long, hardly sloping, merging gently with the root of the tail.

Not projecting below elbow level.

Underline and belly: Slight tuck up towards rear.

TAIL: Set-on broad and strong. Tail long and heavy. The last vertebra reaching at least to the hock joint. When in repose, the tail hangs straight down or slightly upturned in the lower third. When animated, it is carried higher.

Metacarpus (Pasterns): Seen from the front vertical in prolongation of the forearms; slightly oblique seen from the side.

General appearance: Muscular with moderate angulation. Seen from the back, hind legs are parallel, not standing closely together.

Stifle (Knee): Well angulated, turning neither in nor out.

Lower thigh: Slanting and rather long.

Metatarsus (Rear pastern): Straight and parallel when seen from behind.

Hind feet: Broad, with strong, tight, well arched toes. Dewclaws tolerated if they do not hinder the movement.

GAIT / MOVEMENT: Harmonious far reaching movement with good drive from the hindquarters, the back remaining stable and firm. Front and hind feet move forward in a straight line.

Height at the withers: For males minimum 70 cm,

Dogs which exceed the maximum height will not be penalised, provided their general appearance is balanced and their movement is sound.

FAULTS: Any departure from the foregoing points should be considered a fault and the seriousness, with which the fault should be regarded, should be in exact proportion to its degree and its effect upon the health and welfare of the dog.

The latest amendments are in bold characters.